“War is just war and a timeless excuse for

Gor Soudan is a conceptual, abstract, thinker and a revolutionary artist. He holds a BA in Sociology and Philosophy from Egerton University. With his paintings, photos, mixed media work, and installations he explores and critically assesses social and political constructions and humanity.

He has described his work as “work in progress. It is an ongoing experiment with scraps of paper, like carton and old newspapers. In working like this I

have something in common with the ‘crow beings’ that I paint, scavenging emotional refuse such as disappointment, denial, hysteria, euphoria, and

other states of emotional agitation. I reconstruct these concepts as props for

a plot in which man is as crow and crow is as man, helplessly, endlessly caught up in an inevitable and unmanageable process of change.”

Gor’s work includes the ‘Crow’ series, which are about power. He explores the life of the disenfranchised -“those who perch at the window and watch the people at the party" – and examines how decisions made by the powerful - “those in so-called power are not necessarily the legitimate authorities”- can negatively affect those without.

His style is bold, dark and confrontational. His works are not easily

understood: looking at these at face value will not suffice, instead they 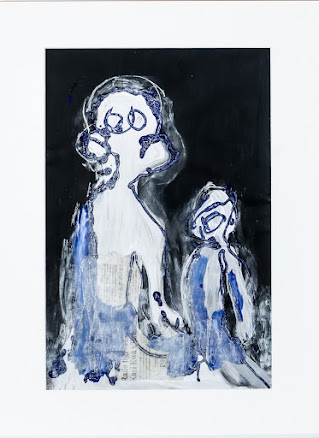