" I attempt to create immersive environments that provoke

the viewer to consider issues relating to labor, the

anonymity of the individual in the urban landscape, and

Ayman Ramadan’s work is site-specific and deeply socially engaged. Even as
his work navigates contemporary social and political issues, it is inevitably
deeply enmeshed in the visual vocabulary of the Islamic artistic tradition.

chaotic megalopolis of Cairo, where he now lives and works.

Islamic concepts and forms, folk superstition and ritual, and contemporary reconfigurations of both subtly meld into each other, inform each other, and

Ayman has showed his work in over 40 exhibitions in various countries in Africa, Asia, Europe, North America and South America. Examples include:

His work has been acknowledged by various awards and scholarships and Ayman followed various residencies, including at the Rijksakademie in Amsterdam (2011/2012). 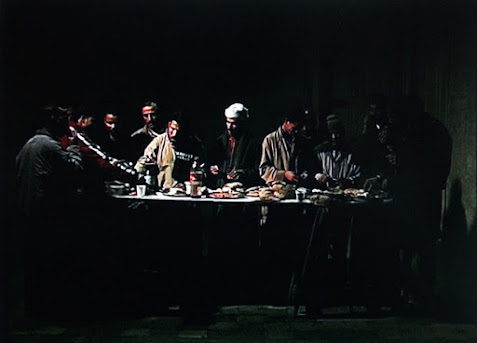 Iftar
Each afternoon during the month of Ramadan, workers abandon their activities and gather for the free Iftar meal. The piece slowly unfolds, making a clear reference to a Christian artist’s depiction of a group of people dining in a scene that has, across both East and West, become iconic.